As a very powerful social media management superhero, we need to make sure that Publer remains a well-behaved citizen of the virtual world.

We’re trying to build great relationships with the social networks that Publer’s been integrated with and in order to create a safe environment for everyone, below are the anti-spam efforts we have taken.

While the social networks, besides Twitter, don’t explicitly have a limitation on how many posts you can publish on them in a day, we have decided to do so in order to prevent abuse and to allocate resources properly. If you think about it, there’s a very thin line between automation & spamming.

For Facebook Groups, we also have a limitation on the number of links you can share in a day since they’re very prone to being marked as spam by other Group members.

These limits are per social account and are rolled over a 24 hours period. If necessary, they may change at anytime without prior notice.

Twitter, with the most recent rules. is very clear when it comes to automation: unique non-abusive content only!

This is why when scheduling your Tweets with Publer:

Even if you try to find a way to schedule the same or substantially similar Tweet on more than one Twitter account or more than once, Publer doesn’t allow that.

Even though we will keep doing our best to make sure that you don’t break Twitter’s rules, it is also your responsibility to obey. Failing to do so will get you permanently restricted from using Publer.

One of the Facebook platform policies we have agreed on is to keep Publer’s negative feedback to a minimum. Even though the content published by Publer is always user-generated, it is our responsibility to make sure that your posts are not creating a negative experience among other Facebook users.

Thanks to Publer Analytics, we can see the negative feedback (marked as spam, hidden, and so on) for each published post. Our anti-spam system will automatically notify you and remove Facebook posts that receive a high number of negative feedback.

If you keep using Publer to publish posts that are against Facebook community standards or receive a high number of negative feedback, you will be permanently restricted from using Publer.

If links from a certain domain keep being marked as spam by other users, that domain will be blocked and no further link from that domain can be used within Publer.

While recurring posts are pretty handy if you’re organizing a weekly or a monthly event, there’s plenty of room for abuse. In order to prevent spamming, an occurrence of a recurring post will be published ONLY IF one of the following is true:

When scheduling in bulk, posts need to be unique. Use recurring posts if you need to schedule something more than once (except for Twitter).

Except Twitter, you can post to multiple Facebook & LinkedIn accounts at once, but if you’re posting to a lot of them, we advice you use the “delay between posts” option.

This will make your posts look less “robotic”.

Last, but not least, if you fail to comply with the terms above, we will have no option but to permanently restrict you from using Publer. There will be no exceptions, so it doesn’t matter if you’re a paying customer or not. Your actions can equally hurt all of us. Visual content is a thumb-stopping strategy for many digital marketers. They always help highlight the best part of a product, service, or information they’re trying 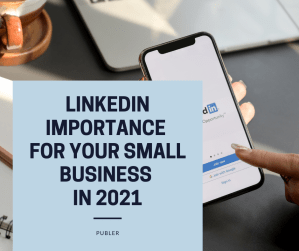 LinkedIn Importance for your Small Business in 2021